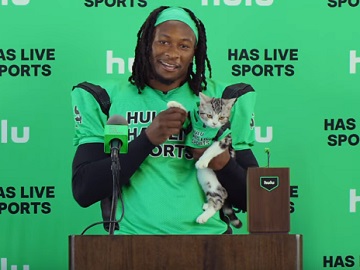 Todd Gurley stars in a new commercial for Hulu, that touts the Hulu + Live TV service, which has over 60 live channels plus 85,000 episodes of shows, movies and exclusive originals. However, the athlete doesn’t say that because – as the streaming service itself says it – he was only paid to say “Hulu Has Live Sports”.

The 30-second spot, part of the “Hulu Sellouts” campaign, features the LA Rams running back during a press conference, with his cat, Mr. Hulu Has Live Sports, who was introduced in a previous ad, earlier this year, as an Instagram sensation – a catfluencer, with tons of followers.

“I’m Todd Gurley and yeah, Hulu has live sports,” he says holding his pet. One of the reporters points out that this is the fifth question he’s answered that way and asks him if Hulu had paid him a ton of money to say that. Gurley answers “Yeah,” which makes the reporter continue his “interrogatory”. “Did they pay you to say Hulu Plus Live TV comes with over 60 live channels? Plus 85,000 episodes of shows, movies and exclusive originals?” The athlete shakes his head and the reporter asks a final question: “Anything else?”.

The “Hulu Sellouts” campaign debuted earlier this year with a spot featuring NBA player Joel Embiid with a new nickname: “Hulu has live sports”. The Philadelphia 76ers center, who explains to a kid that he gave up to his nickname, “The Process,” for this new one for money, is seen, at the end of the video, during a press conference wearing a jersey featuring the text “Hulu has live sports” and reading from his hand the same text. The campaign also features Damian Lillard of the Portland Trail Blazers and All-Star Game team captain Giannis Antetokounmpo.
Gurley has also starred in commercials for Pizza Hut, Microsoft Surface, Gatorade. He also has endorsement deals with Nike, Carl’s Jr., Bose and others.