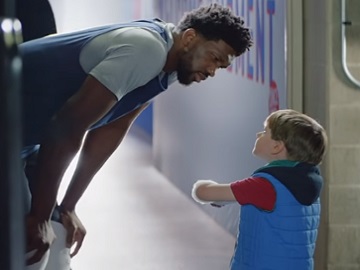 Joel Embiid changed his nickname from “The Process” to “Hulu has live sports”. The NBA player stars in a new commercial for the streaming service, signing a basketball for one of his fans, who can’t help noticing the change.

“I thought your nickname was ‘The Process'”, the young man tells Embiid, who replies “Not anymore.” Another fan is then asking him to sign a basketball without the “Hulu has live sports,” but the Philadelphia 76ers center lets him know that he can’t do that “legally”. As he walks away, a little boy with his hand in cast, signed by Embiid in the same way, asks him why he changed his nickname, which makes Embiid give a short and honest answer: “Money”.

The spot is part of Hulu’s latest campaign, entitled “Hulu Sellouts” and created in partnership with Big Family Table. Embiid is not the only star to be featured in this campaign. Damian Lillard of the Portland Trail Blazers also appears in a spot, informing that Hulu has live sports available for streaming. All-Star Game team captain Giannis Antetokounmpo and other athletes from varying professional sports will also be featured in additional spots, that are set to be released in the coming weeks and run through June.