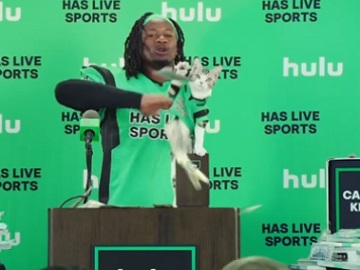 The 30-second commercial features the Los Angeles Rams running back revealing to a friend that he’s making cat videos for Hulu. His cat, named “Mr. Hulu Has Live Sports,” became a sensation on Instagram, a “catfluencer” as Gurley labels him, with tons of followers. “This is crazy,” his friend says watching the video Gurley posted on the social network and Mr. Hulu Has Live Spors, wearing a personalized green jersey with this text, who’s also watching the same video of himself.

The end of the video sees Gurley and his catfluencer during a press conference throwing money at the journalists while saying “Hulu has live sports,” a nod to the paid partnership with the streaming service.

The “Hulu Sellouts” campaign debuted earlier this year with a spot featuring NBA player Joel Embiid with a new nickname: “Hulu has live sports”. The Philadelphia 76ers center, who explains to a kid that he gave up to his nickname, “The Process,” for this new one for money, is seen, at the end of the video, during a press conference wearing a jersey featuring the text “Hulu has live sports” and reading from his hand the same text. The campaign also features Damian Lillard of the Portland Trail Blazers and All-Star Game team captain Giannis Antetokounmpo.