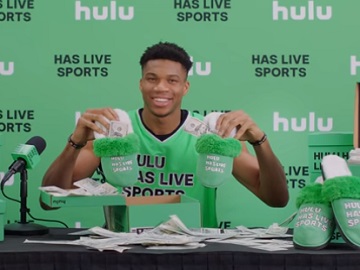 The spot features Antetokounmpo trying on the “Hulu Has Live Sports” slippers and sharing his reluctance to wear them out in public. He learns, from the two men that were waiting to see him wearing the green slippers, in an office that he doesn’t have to do wear them in public, because out in the world he is Nike. However, on the couch he is “Hulu Has Live Sports” and he must conform, otherwise he will see how his toes feel on his bank account.

The end of the commercial sees Antetokounmpo during a press showcasing the green slippers featuring the text “Hulu has live sports”.

The “Hulu Sellouts” campaign debuted earlier this year with a spot featuring NBA player Joel Embiid with a new nickname: “Hulu has live sports”. The Philadelphia 76ers center, who explains to a kid that he gave up to his nickname, “The Process,” for this new one for money, is seen, at the end of the video, during a press conference wearing a jersey featuring the text “Hulu has live sports” and reading from his hand the same text.

The campaign also features Damian Lillard of the Portland Trail Blazers. Other athletes from varying professional sports will also be featured in additional spots, that are set to be released in the coming weeks and run through June.