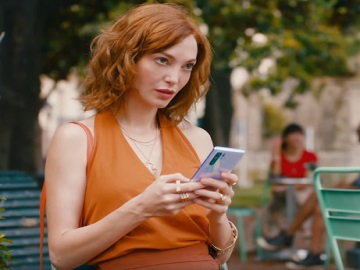 Huawei continues its “Rewrite The Rules” campaign with a new installment that focuses on the Huawei P30’s 10x Hybrid Zoom.

The 20-second spot, dubbed “Super Zoom – Love,” features a red-haired woman who notices a young man reading a book at a table, in a coffee shop, and uses her Huawei P30’s 10x Bybrid Zoom to bring him closer to her. As a metaphor to illustrate the phone’s amazing zooming capability, her love interest is seen being “dragged” with his book, chair and table right next to her. Once she has him really close, she proves she was actually aiming something else: a ladybug on his shirt. Carefully helping the insect to get on her finger, she then sends her up in the air and smiles to the guy.

The commercial ends with the tagline “Closer to the things you love” flashing across the screen, as well as with a snapshot of the Huawei P30 Series and the Rewrite The Rules of Photography hashtag.

The tech company Huawei has been advertising the latest versions of its flagship smartphone series in several other ads that highlight the optical SuperZoom lens. One of them features a young man who uses the 10x Hybrid Zoom at night, while standing on the balcony, in the company of his girlfriend, and acts as if he’s bringing the moon closer with the power of his hand. He then uses the same camera feature to make the moon very small and placing it to his partner’s ear, as if it were an earring.

The Huawei P30 Series was unveiled on March 26, 2019, at a special event held in France’s capital city.

The P30 features a 6.1-inch, 2340 x 1080 OLED display with a teardrop notch, triple rear cameras, a Kirin 980 processor, a 3650mAh battery, 6GB of RAM and 128GB of storage, a headphone jack, an in-display fingerprint sensor and IP68 water- and dust-resistance. The P30 Pro features a 6.47-inch, 2340 x 1080 curved OLED screen that doubles up as a speaker by vibrating, a triple camera system, a 4200mAh battery, the same processor as the P30, but with 8GB of RAM and three different storage options – 128GB, 256GB and 512GB, and IP68 water- and dust-resistance. The smartphones’ Leica Quad Camera System also feature, besides the 10x Hybrid Zoom, a new Huawei Time of Flight Camera, the innovative Huawei SuperSpectrum Sensor, as well as enhanced optical and AI image stabilization technology.

Customers have three colors to choose from for their P30, namely black, white and blue, and four different colors for the P30 Pro – black, white, blue and orange.