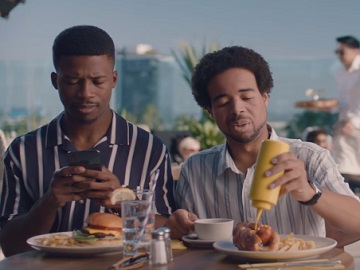 HotelTonight advertises its Daily Drop feature in a hilarious new commercial, aimed at highlighting that booking a hotel with HotelTonight’s Daily Drop gives smart, savvy travelers an edge over average vacationers, who often find themselves having a hard time dealing with the deal that got away.

The 30-second ad shows two young men having lunch by the pool and talking about how hotel life is the best. One of them confirms, declaring that it is indeed the best, especially when you Daily Drop. His fellow, who’s having a coffee and a hot-dop on which he’s pouring some mustard, is surprised to learn about this feature, that lets you unlock an amazing deal once a day. “The Daily Drop gave you an amazing deal on this hotel?” he asks, without looking at what he’s doing with the mustard bottle and pouring the seasoning into his cup of coffee. The other guy tries to tell him not to drink the coffee, but he understands something else and says he won’t use “that other booking site again”.

The commercial ends with the voiceover saying the tagline “Deals so good you’ll be sorry you missed them” and urging viewers to visit the Hotel Tonight website or get the app to unlock their Daily Drop once a day.