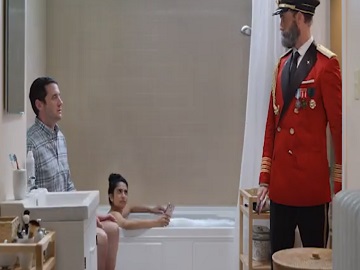 The spot, released with the #Romance hashtag, opens with a young couple kissing on the beach, near a heart made of petals of red roses but it soon turns out that is a photo posted on Instagram that another woman is looking at while taking a bath in her bathtub, at home. “See, romance isn’t dead,” she says as she gives a “Like” to the respective picture. When the camera pans out, it turns out she was telling that to her husband, who is sitting on the toilet. “But it is here,”adds Captain Obvious, who’s standing right in their bathroom. “Thanks, Captain Obvious!” the wife answers.

The Hotels.com iconic pitchman, played by Brandon Moynihan, made his first appearance in a Hotels.com ad in February 2014 and has become an advocate for the hotel booking portal, informing people about the Rewards program, while doing all kind of things. In an election year, he decided to join the presidential race by actually running and campaigning with unique ads for all 50 states. The “Captain Obvious Runs for President”, which earned the reputation of “the most effective campaign in Hotels.com history,” saw Captain Obvious running on the campaign trail, featuring Hotels.com hotels as he went. To the UK market, he was introduced in May 2016 through a series of ads created by agency CP+B London.

The Hotels.com Members Rewards loyalty program offers members the chance to get one free night when they collect ten.

The free one, whose maximum value is the average daily rate of 10 paid nights, can be redeemed at over 213,000 properties anytime, anywhere, from major hotel chains and beach resorts to boutiques, villas and apartments, with no blackout dates or restrictions applied. Being a member in Hotels.com Reward program comes with other perks, too, including lower prices that aren’t available to everyone, the chance to get up to 50% off thousands of properties in popular destinations, as well as the chance to save with Secret Prices.