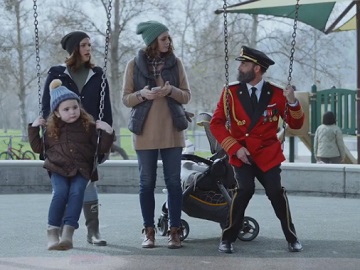 Hotels.com has released a new commercial, that tackles a situation many people have been into and that has become quite common in the social media era – having one friend who takes lots of vacations and is always rubbing it in everyone’s face and your finger hurts from hate-liking all of her posts.

The 30-second spot, dubbed #AnotherVacation, features two moms in a park scrolling down through their Instagram feed and finding out that one of their friends is on another vacation. “Wow! So happy for you! Smiley face emoji,” one of the two moms writes down in a comment to a photo taken by the pool by the “lucky” woman. At this point, Captain Obvious, who’s swinging next to them and a child, can’t help but notice: “Funny how the words you type don’t reveal the jealousy you actually feel”. “How is she there and we are here?” the other mom asks. Captain Obvious is again ready to give them an answer that leaves them quite speechless: “Condoms!”.

“Don’t hate-like their trip! Book yours with Hotels.com and get rewarded basically everywhere,” Captain Obvious says at the end of the commercial, adding the tagline “Hotels.com. Be there. Do that. Get rewarded”.

The Hotels.com embarrassment-proof pitchman, played by Brandon Moynihan, first appeared in a Hotels.com ad in February 2014. The iconic character has been since then an advocate for the hotel booking portal, informing people about the Rewards program, while doing all kind of things. In an election year, he decided to join the presidential race, by actually running and campaigning with unique ads for all 50 states. The “Captain Obvious Runs for President”, which earned the reputation of “the most effective campaign in Hotels.com history”, saw Captain Obvious running on the campaign trail, featuring Hotels.com hotels as he went. To the UK market, he was introduced in May 2016 through a series of ads created by agency CP+B London.