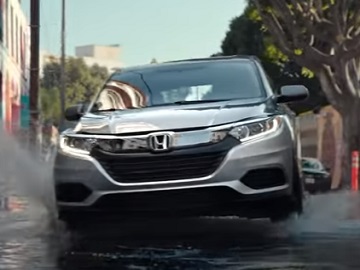 Honda showcases its SUV lineup, featuring the CR-V, and the redesigned HR-V and Pilot in a new commercial, highlighting that Honda has the right SUV to fit your lifestyle and get you where you need to go, even if it’s to family dinner.

The 30-second spot, narrated from the perspective of a woman who’s going to a family dinner, features her getting at the wheel of her Honda CR-V LX, as well as her siblings, who are also Honda owners. Her little brother drives a Honda HR-V and her older brother, who has three kids and a big dog, drives a 2019 Pilot LX.

“My family, we’re always on the move. Little brother – is living it up. And my big brother, he’s got his hands full. But when mom says ‘Come home for dinner,” what could possibly stand in our way? Nothing. When you’re part of a family like this, you always show up,” the woman says in voiceover.

Features like Rearview Camera Display and Lane Departure Warning are also shown throughout the ad, which concludes with an onscreen line informing that Honda was “Awarded Best SUV Brand for 2019” according to U.S. News & World Report. A different voiceover adds the tagline “The Honda family of SUVs. Making sure you get to the best moments in life”.