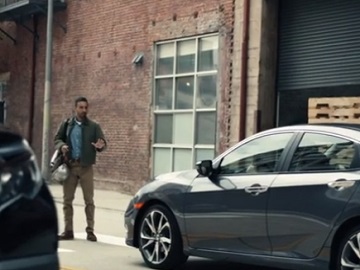 The spot includes footage of a man leaving from work juxtaposed with footage of his family, friends, and coworkers as they talk about him. “Mark is the best husband and father you could ask for,” his wife says, holding their toddler. Next, Mark’s sister is shown on a train, as she describes him as “just a big kid”. A friend says of him he is a “great guy,” and jokes that you just have to keep him off the dance floor. His nephew says Mark is the best, adding that he taught him how to steal a base. His mother and his boss are also featured praising him, while he is shown crossing a street without paying attention and being almost hit by a car. At this point, all those who talked about him are almost bursting into tears as they’re feeling the pain of losing Mark. However, things take a positive turn when the car brakes just in time, avoiding the fatal collision.

“Collisions affect more than those involved. That’s why we make vehicles than can brake before you do. Safety for everyone” onscreen lines read at the end of the commercial, which also sees Mark returning safe and sound home, to his family.