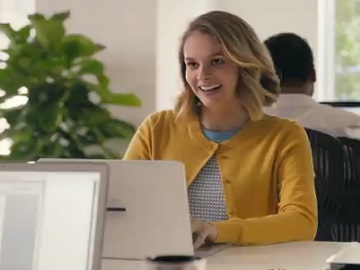 The 30-second spot features a young woman informing her co-worker, who’s sitting in front of her, at the same desk, that Havertys is having a big sale. “Hashtag new living room,” she says, doing the hashtag sign with her fingers.

“You know, people don’t actually use hashtags when they talk,” her colleague tells her. “Hashtag this girl does,” the woman says, pointing towards herself. “Like that, no one ever does that,” the co-worker says, asking then the woman to stop it when she keeps doing the hashtag sign.

The commercial ends with the voiceover saying that “Havertys 2019 Kickoff is on” and urging viewers to get an extra $100 off every $1000 they spend on furniture that’s already marked down. “It’s savings on top of savings,” the voiceover adds, while on screen various pieces of furniture are shown, such as the Norfolk 3-Piece Sectional, priced at $2299, the Wrangler Manual Reclining Sofa, priced at $999, the Briar Lake Queen Panel Bed, priced at $499, and the Copper Canyon Dining Set, consisting of dining table, two coffee and two beige Parsons chair, priced at $2955.