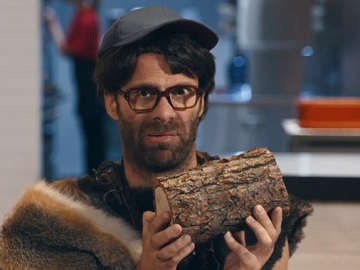 The 15-second spot features Ron in a Hardee’s restaurant, near a prehistoric man who’s trying to chew a piece of wood, saying that “now we have the juicy thickburger,” made with fire and “100% Black Angus beef.” “It’s the future,” he adds before the voiceover urges viewers to try the new delicious thickburger.

The new Grilled Cheese Bacon Thickburger, made with a one-third pound Black Angus Thickburger, bacon, two pieces of Swiss cheese and two pieces of American cheese, all served between two slices of lightly toasted sourdough bread rounds, will be available at participating Hardee’s locations, starting at a suggested price of $5.89, for a limited time only, through April 23, 2019.

This is not the first time Ron stars in a commercial for Applebee’s. He also appears in other ads. One of them is aimed at highlighting that the chain’s Buttermilk Biscuits are made from scratch and the other promotes the Angus Thickburgers Melts.