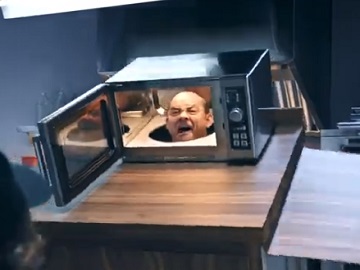 The 15-second spot features Ron in a Hardee’s restaurant saying that, at Hardee’s, they make their juicy thick burgers the right way, “with 100% Black Angus beef and fire.” “We even figured out a way to weed out our less dedicated employees,” reveals Ron, while on screen a young employee is seen trying to heat the burgers in a microwave oven but being caught by Ron, whose head is in the microwave.

This is not the first time Ron stars in a commercial for Applebee’s. He also appears in a previous ad, that focuses on the fact that the chain’s Buttermilk Biscuits are made from scratch.

Previous: WordPress Commercial: Build a Website That Can
Next: Jack in the Box $4.99 Sourdough Patty Melt Combo Commercial