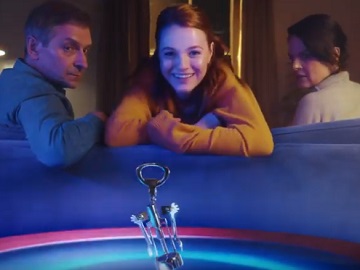 “With the new Halifax Family Boost Mortgage, Alice gets help buying her first home and mum and dad get interest on their savings. Everyone’s a winner,” the voiceover says on the 30-second ad, which features a young woman hugging her parents and celebrating with them this milestone in her life. The corkscrew is also joining the “party” and shows off his dance moves under the lights, which also come to life, putting it into the spotlight.

The soundtrack music is the 1978 hit single “Every 1’s a Winner” by the British soul band Hot Chocolate.

The Family Boost Mortgage is available in England and Wales for first-time buyers only. The bank also specifies that one applicant must hold a Halifax Reward or Ultimate Reward current account and that a new Halifax savings account is also required.

Earlier this year, in April, Halifax released a new animated spot from agency adam&eveDDB, featuring Dorothy, her dog, Toto, and her three friends from MGM’s 1939 movie The Wizard of Oz. The bank is known for using other iconic cartoon characters. In 2017, Scooby, Shaggy, and the rest of the gang from the Mystery Machine appeared in a spot for Halifax, and in 2016 Fred Flinstone and his wife, Wilma, took center stage in a spot featuring them in search of a modern bank. The same year, Top Cat was brought out of retirement to highlight, in a new campaign from the bank’s longtime agency, Adam&EveDDB, how Halifax’s colleagues give “extra” to every single customer.

Previous: Samsung Galaxy Note10 Sleepy Man Commercial – How to get through Monday
Next: Air Canada Sandra Oh Commercial – Travel Like a Canadian