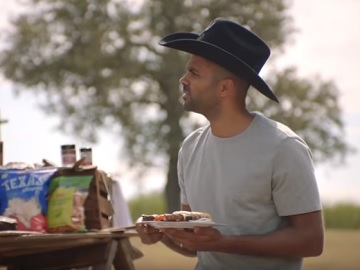 H-E-B has released a new commercial to welcome Tony Parker’s No. 9 jersey to the legends club.

The spot features Parker as he’s given a tour of the Spurs Retirement Ranch, where George Gervin is doing goat yoga, Sean Elliott is trying to rope The Coyote, Bruce Bowen is serving up some good eats, with all the best H-E-B Primo picks. Toward the end of the video, Tim Duncan is seen making an entrance as only he can, at the wheel of a personalized ATV specially created for Parker, who says he already loves that place.

“H-E-B Primo picks. Legendary Texas taste for legendary gatherings,” the voiceover says at the end of the spot, which also sees David practicing his axe throwing.

San Antonio Spurs retired Tony Parker’s No. 9 jersey at an event held at the AT&T Center, on November 11. After 17 years as a Spur, Parker, who became “the greatest point guard in Spurs history,” said goodbye to his fellows.

“To play for you guys, to play together, you have no idea how much impact you two [Duncan and Ginobili] had in my life,” Parker said. “You inspire me every day and yes, I can talk about what we did on the court, but my favorite is off the court, that we still talk and still spend time together. I love you two and we’ll be together forever.”