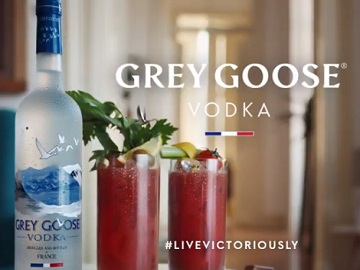 Grey Goose vodka brand continues its “Live Victoriously” campaign with a new installment, that aims to encourage people to live like they hit from half court.

The 15-second spot, dubbed “Apartment Basketball,” features a woman in an apartment as she grabs a green olive and gets ready to throw it as if she hit from half court. She proves she has some quite strong skills in this regard since the olive ends up in the right spot: a cocktail made with Grey Goose Vodka. She and her partner are then seen celebrating the “victory” with a toast.

A previous spot, that urged people to “Live like you’re on the leaderboard,” featured the same woman getting ready to throw the olive as if she was on a golf course. Grey Goose, known as a major sponsor of the PGA golf tour, was sold in 2004 by its founder, Sidney Frank, to Bacardi. The vodka is available in different varieties, from La Poire to L’Orange, Le Citron, and more.