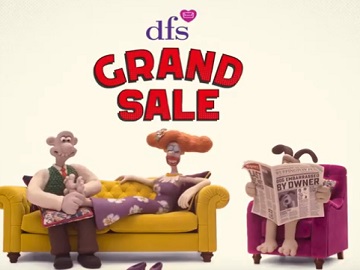 Helena Bonham Carter reprises her role as Lady Tottington in the newest DFS advert, which promotes the Grand DFS Sale.

The spot, created in collaboration with agency krow and Academy Award-winning animation studio Aardman in the same method of stop-motion animation, features Wallace & Gromit and the voice of Helena Bonham Carter as Lady Tottington. Wallace is shown inventing the ultimate sofa, complete with a built-in foot massager, for Lady Tottington, in an attempt to win her affection, but things don’t go to plan. Luckily, Gromit helps him by taking them to a DFS factory and having the DFS craftspeople make a sofa for Lady Tottington.

“The Grand Sofa Caper” campaign, which debuted on 14th December in cinemas nationwide, is scheduled to premiere on 21st December on all major TV channels and air until 24th February. It also includes press, digital, out-of-home, radio, social and email elements.

Darryl George, creative director at krow, said: “We’ve teamed up with Wallace & Gromit to bring some much-needed cheer into the nation’s homes. And to show that, with DFS, even people famed for wearing the Wrong Trousers can find the right sofa.”