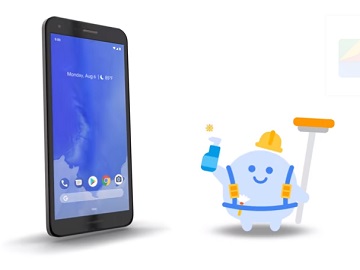 Google has released a new commercial, introducing Screen Cleaner in the Files app, a feature that helps keep your phone clean inside and out.

The spot presents the Files app, used by millions of people to keep their phones organized and clean, and highlights that, besides the many ways to keep your phone’s display clean – such as wiping, cases, cases for cases and even specialized hardware, this app includes a new feature that makes your phone able to keep itself clean from the inside out: Screen Cleaner. According to the ad, Screen Cleaner “uses Smudge Detector API to identify imperfections” and – “using geometric dirt models and haptic micromovement generator,” dislodges dirt, smudges and more. “Once the phone is clean, internal vibration and haptic controls create microvibrations forming a long-lasting non-stick shield around the surface of the phone,” the voiceover also says on the 90-second spot, informing, at the end, that – “with just a few taps, your screen is like new, with a fresh pineapple scent”.

While there might be people who believe this new smart feature could really be implemented, it must be said this is the tech giant’s surprise for April Fool’s Day.

This is not the only prank for the occasion from Google, this year, though. The company has also introduced the classic arcade game Snake in its Google Maps app. In 2018, Google released several jokes, including a “Where’s Waldo?” integration into Google Maps, Google Cloud Hummus API, a “physical handwriting version” of the Gboard virtual keyboard app, a “Bad Joke” detector, renewable energy chromebooks, and more.