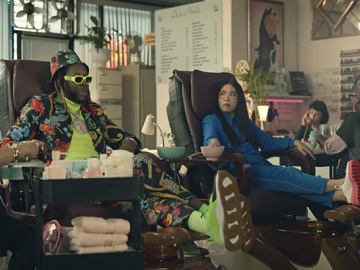 Google showcases the Pixel 3a and some of its most important features in a series of new ads.

One of them, which is 90-seconds long, features a “Real Talk with 2 Chainz and Awkwafina”. While having their manicure done, the two rappers are talking about their unnamed phones running out of storage. Awkwafina says that the other day she had to delete a picture of her grandmother in order to take a picture of her grandmother, and that she’s already running out of battery. She also adds that, for $1000, she wants a phone that gets her. Both artists start listing then the things their phone should know, namely their schedule, taste, music, how completely ambivalent Awkwafina is to all superhero movies, where to get sea bass when they crave it, and more.

“Are we asking too much for a phone that does the dope things we want without paying for the dumb things we don’t want?” says Awkwafina. So both decide to say goodbye to their current phones, which will replaced by the Pixel 3a.
“Say goodbye to unhelpful phones,” an onscreen line reads at the end of the spot, before the Pixel 3a, starting at just $399, is showcased.

Other Pixel 3a commercials highlight features like the Night Sight, which allows users to take great photos under low-light conditions, Fast Charge, Active Edge, a feature that allows users to squeeze the sides of the phone to call up Google Assistant, as well as the long-lasting battery and the unlimited photo storage.

The tech giant’s mid-range Pixel line also includes Pixel 3a XL. The Pixel 3a and Pixel 3a XL are priced at $399 and $479, respectively.