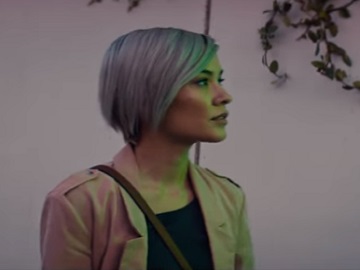 GoDaddy has launched a new TV ad campaign, titled “Make The World You Want” and aimed at inspiring people to pursue their dreams and turn their ideas into reality, against all odds.

The campaign, which is also celebrating makers who stopped at nothing to reach their goals, stars 65-year-old Lyn Slater, a NYC professor who became the fashion world’s “Accidental Icon”, Canadian-American actress Ayesha Curry (wife of Golden State Warriors Basketball player Steph Curry), who is also a celebrity cook, cookbook author and television personality, Tyson Toussant, co-founder and CEO at Bionic Yarn, which creates yarns and fabrics made from recycled plastic, Dan Peterson, who enlists artists to transform run-down basketball courts into beautiful and safe community spaces, Miami-based floral visionary Paloma Teppa, founder and creative force behind the Wynwood institution Plant the Future, an art and design studio, and LA-based electropop recording artist Elohim, who uses her domain to open the lines of communication on mental illness. They are all real GoDaddy customers and they are all featured in a main 60-second anthem commercial, carrying the #maketheworldyouwant hashtag, that debuted on February 8 on E! and on digital channels.

“The world isn’t black and white. There’s no set path. No way you have to be. So why not do what you’ve been dreaming of? When you’re stuck in someone else’s story, write your own. When they want you to be quiet, say it louder. When you create change in society – make it happen. Don’t listen to self doubt. Don’t stop for people who don’t understand your vision. Whether it’s big or small, just go full steam ahead. You’ve got the power, we’ve got the tools. Make the world you want, and share it with everyone. Make your own way,” the voiceover says. Footage of a short-haired blonde woman who grabs a laptop and starts creating a website at the end of the video is juxtaposed with relevant captures of the six above mentioned entrepreneurs.

The campaign, created by GoDaddy’s internal team, also includes six different ads, dedicated to each of the entrepreneurs. The spots are set to roll over the next six months, tied to relevant big-ticket moments, such as the New York Fashion Week, the Grammys, and more.