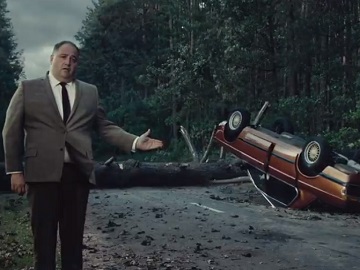 The spot, titled “Tree” and created by Droga5 London, the agency that won GoCompare’s £40m advertising account earlier this year, in March, features Compario re-enacting a car accident that led to a real insurance claim. The opera singer doesn’t sing anymore this time, but gets therefore behind the wheel as Margaret Mahoney, the woman that made the claim. “It was just another normal day in Margaret’s normal life, but a chance encounter would turn her world upside down,” Wynne Evans, the Welsh tenor who plays Compario, and appears in the opening of the advert, says in voiceover. As the video goes on, it turns out the woman hit a tree fallen on the road, in front of her, as she didn’t have enough time to brake, and had her car damaged.

“We never know what’s around the corner, which is why GoCompare now gives £250 free excess cover for when the unexpected happens,” Evans adds at the end of the advert, which is set to debut on Sunday (25 August). The offer is valid for qualifying customers when they buy or switch insurance through the comparison website.

The new campaign also includes another ad, a new visual identity of the brand, 10-second videos for GoCompare’s sponsorship of Dave’s weekend programming, as well as out-of-home activity across the UK.

Compario has become one of the longest-running characters in British advertising. He became GoCompare’s mascot in 2009 and has appeared, since then, in numerous ads.