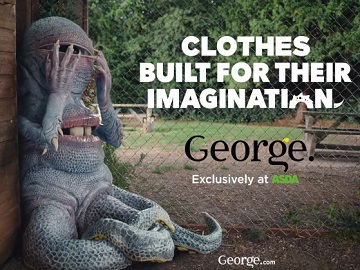 George at Asda, one of the biggest names in affordable fashion in Britain, has released its Back to School advert, highlighting that at George you will find a world built for the kids’ imagination.

The spot aims to illustrate this idea by featuring a group of kids playing at a school playground. Donning the George school uniform, they are initially seen trying to run away from a monster that gets out from the building and chases them. Toward the end of the advert, though, it turns out the monster was actually a peer and they were just playing a game of hide and seek.

“Clothes built for their imagination” an onscreen line reads at the end of the video, which sees one of the boys becoming a monster as he’s bound to count to ten while the other children are hiding.

The advert, from agency AMV BBDO, launched in Scotland on 27 July and is set to be rolled out across the rest of the UK from 10 August. The clothing brand revealed that the campaign was created in collaboration with a group of school children who were asked to share their favorite playground game. The monster shown in the ad – brought to life by CGI – was also created in collaboration with the kids as they were also asked to draw an imaginary “monster”.