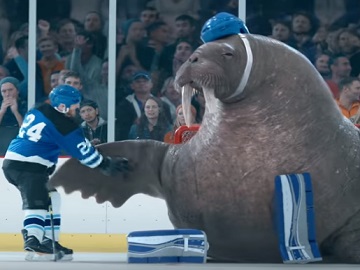 A hockey player is frustrated when he can’t score due to the other team having a walrus as their goalie in the latest GEICO ad.

“GEICO makes it easy to get help when you need it. With licensed agents available 24/7. It’s not just easy. It’s having a walrus-in-goal easy!,” a team’s coach says on the 30-second commercial, praising then the walrus, who it turns out is named Duncan, and throwing a fish at him as a reward.

“It’s not just easy. It’s GEICO easy,” the voiceover says at the end of the spot, which features James McCauley as the coach, Travis Leighton as the offensive player, and Brent Chase as the defensive player.