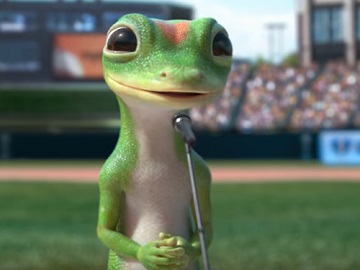 The Gecko makes an announcement in the opening of a baseball game thanking members of the military for their service.

The spot opens with the company’s mascot holding a speech in front of the audience. “Ladies and gentlemen, your attention, please. GEICO would like to take a moment to say thank you to our military service members at home and abroad for all their hard work and sacrifice. We all sleep easier knowing you’re out there keeping us safe,” he says. He then continues by saying, “on a personal note,” something else which cannot be heard due to fighter jets flying overhead.

After a round of applause from the crowd, the Gecko concludes “Just needed to get that off my chest. Thank you.”
“GEICO. Proudly supporting the military for over 75 years,” the voiceover says at the end of the commercial.