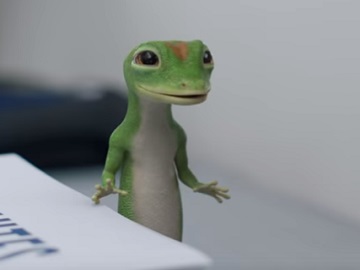 GEICO’s mascot has a surprise in the company’s latest commercial. After printing out hundreds of flyers with GEICO’s tagline, “15 minutes could save you 15% or more on car insurance,” he finds out from his boss that he needs to have them reprinted.

The 30-second spot shows the man, played by Morgan Peter Brown, entering the room where the Gecko manages the flyers and tells him that they’re gonna swap over to “Over 75 years of savings and service”. “What? We’re just going to swap over?” the mascot asks, almost shocked to hear that he shall “pump the brakes on this and swap it over to that,” after all his work. Asked about what they are going to do with the copies already done, the boss instructs the gecko to keep them in his desk and save them for next time.

The commercial ends with the voiceover, Andrew Anthony, saying the company’s new tagline, “GEICO – Over 75 years of savings and service”.

In a previous commercial, in which the Gecko made an announcement in the opening of a baseball game, thanking members of the military for their service, GEICO highlighted that it has been “proudly supporting the military for over 75 years”.