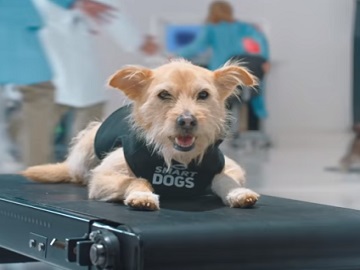 After announcing, in a teaser released at the end of last month, the arrival of the Smartdogs on April 4th, GEICO has launched its new campaign, aimed at stopping distracted driving with the help of the Smartdogs.

“Experts estimate 1 in 3 crashes are caused by distracted driving. But nobody listens to the people telling people to stop. What we need is a non-person drivers will actually pay attention to,” the voiceover says at the beginning of the spot that introduces the Smartdogs – the first dogs trained to train humans. “Smartdogs will be at their best when you are at your worst. Stopping drivers from liking, selfie-ing, and …. whatever this is,” the voiceover says, referring to a guy following a social media trend. “These Smartdogs are about to be unleashed to keep you driving down. So, when will they be available to the public? Never. Smartdogs are not the answer. But GEICO has a simple tip: turn on the Do Not Disturb While Driving mode,” the voiceover says on the 80-second spot.

One of the questions, for instance, is “Is it OK to text at a spotlight?” The Smartdog’s answer is the following: “No. It’s banned in 47 states and a bad idea in all 50. Want a good idea? This wallpaper of my face.”
Other questions are “Is it safe to use hands-free devices while driving?”, “Are teens better at texting while driving?”, “How bad could a quick text be?”, “Can I legally text if I pull off the road?”, and more.