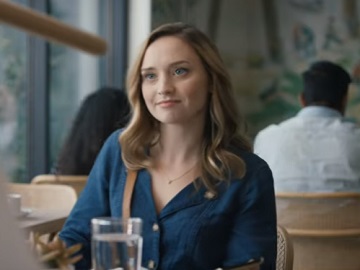 One of the spots shows the wooden puppet (voiced by Benjamin Rowe) entering a restaurant and going on a date which it turns out he scored using an online dating app. His date, Samantha (played by Hillary Matthews), is shocked to learn that the man she was waiting for is actually Pinocchio and leaves. Behind her, he wreaks havoc (without intending, though) because of his nose, which grew after he told her some lies.

The commercial, which also stars Jessica Pohly as the waitress whose tray is thrown to the floor by Pinocchio’s nose, Carlos Carrasco and Penelope Lowder as restaurant patrons, ends with the voiceover saying the tagline “With GEICO, the savings keep on going, just like this sequel. Fifteen minutes could save you 15% or more on car insurance”.

The campaign includes several other spots that show the characters doing all kinds of things. The raccoons, for instance, hijack a garbage truck and start a food truck business called Chez Dumpster.