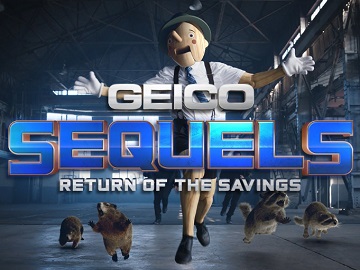 “In a world where everything gets a sequel, nothing is safe, not even GEICO commercials.” this is what GEICO says in its latest commercial, which announces six new commercials featuring classic GEICO heroes with jaw-dropping savings.

The ad stars Pinocchio (voiced by Benjamin Rowe), four motorcycle riders (voiced by Sean Graham, Robbie Madison, Andy Bell, Matt Moss), three raccoons (voiced by Ian Gary, Casey Gullickson, David Wittenberg) and more. The voiceover urges viewers to vote for your favorites at the dedication section on GEICO’s website. One of the raccoons does that using the GEICO app.

At the end of the spot, which also shows the raccoons and Pinocchio trying to escape the bunch of riders, the voiceover encourages people to vote and enter for a chance to win.

“With GEICO, the savings keep on going, just like the sequels,” this is the tagline of the new ads, which feature Pinocchio in different situations, including a date which he scored using an online dating app, the raccoons trying to start a food truck business called Chez Dumpster but having trouble finding customers, and more.