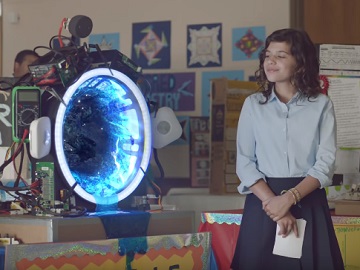 GEICO has released a new commercial to highlight that it could save you 15% or more on car insurance.

The 30-second ad, entitled “Science Fair of the Future,” features two teachers at a science fair, where one of their students, named Sophie, managed to open up a wormhole through time and release figures from the past like Abraham Lincoln, French aristocrats, a samurai and more. “I can’t believe it,” one of the teachers, played by Phil Abrams, says to his colleague, played by Lisa Dinkins. “That Sophie opened up a wormhole through time?” asks the latter, looking at the diverse characters that show up in front of them. “No, I can’t believe how easy it was to save hundreds of dollars on my car insurance with GEICO,” says the teacher, who is then interrupted by the screech of a pterodactyl.

The commercial, which also features Emma Loewen as Sophie, Jack Seavor McDonald as another student, Robert Broski as Abe Lincoln, Mark Chadwick as the bicyclist, Anna Campbell and Giovanni Cirfiera as the two French aristocrats, ends with the voiceover saying the company’s famous tagline, “Believe it. GEICO could save you 15% or more on car insurance”.