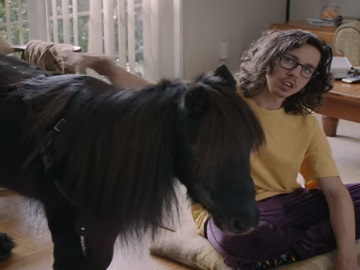 GEICO promotes its Renters Insurance in a new commercial, featuring a roommate who brings home a miniature horse to help relieve his stress from moving into a new apartment.

The 30-second spot features the young man (played by Bill Kottkamp) sitting on the floor and petting his furry friend. Asked by his roommate (Nick Nervies) whose dog is the little animal, he says the latter is his special friend, Antonio, mentioning that his luxurious fur calms his nerves when he’s worried about moving into their new apartment. “Why don’t we just ask GEICO for help with renters insurance?” his roommate asks. The guy, who reveals he hadn’t known GEICO helps with renters insurance and that they could save a bunch, too, then asks Antonio to fetch computer, but the horse ignores his request and leaves the room.

“Get to know GEICO and see how much you could save on renters insurance,” the voiceover (Andrew Anthony) says at the end of the commercial.

Previous: Booking Commercial: People Playing Cricket
Next: Target Back to School For Every School List Commercial