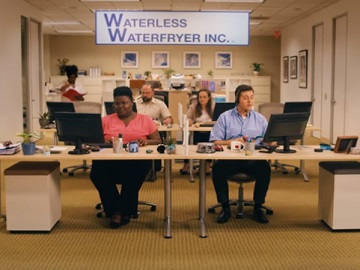 GEICO celebrates its status as a proud partner of the NHL in a new commercial, featuring a worker who, every time he makes a sale, lets the whole office know by hitting his hockey buzzer.

The 30-second spot opens with the hero office man (Ryan Coil), employed at Waterless Waterfryer Inc., ending a phone call with a customer, informing him that two waterless waterfryers should be at his doorstep the next morning. After hanging up, he pushes a hockey goal horn, which makes the colleague sitting at the desk (played by Jasondra Johnson) warn him to stop doing that. “William, I better not hear that again,” she tells the guy, who ignores her and keeps pushing the red button until all the others in the room are brought to exasperation.

“Hockey’s here. The savings never left,” the voiceover says at the end of the commercial, adding “GEICO – Proud Partner of the NHL”.