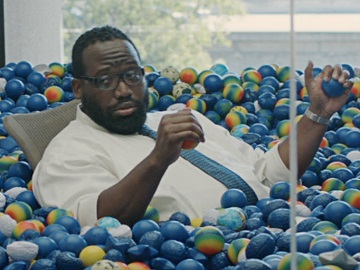 GEICO has released a hilarious new ad to promote its homeowners and renters insurance.

The 30-second spot features a man (played by Sean James) who filled his office with squishy balls to help him relieve stress from buying a new house. A co-worker (played by actor Eduardo Franco) suggests that maybe he would worry less if he got GEICO to help him with his homeowners insurance. Surprised to learn that the company could help him with that, the boss also learns that they’ve been doing it for years. To thank the young man for providing such precious information, the boss – Big Steve – drowns into the sea of squishy balls and gets out and the office door, to give him a hug.

The commercial ends with the voiceover urging viewers to “Get to know GEICO and see how much they could save on homeowners and renters insurance”.

Known for American Vandal (2017), The Package (2018) and Breathe (2019), Eduardo Franco also starred in Samsung’s “Ingenius” campaign, which took a jab at Apple, making fun, more precisely, of the iPhone X.