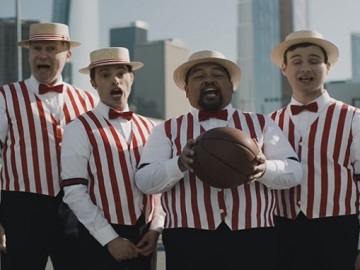 A basketball team is confused when they start playing 4 on 4 with a barbershop quartet in one of the latest GEICO ads.

The spot features two of the four basketball players on court, during the match, expressing their shock upon seeing their opponents. “I can’t believe it,” says one of the guys. “That we’re playing 4 on 4 with a barbershop quartet?” his fellow asks. At this point, the quartet, which is The Accidentals Quartet – consisting of Chris Wade, Robert Rice, Dave Albulario and Josh Munnell – is shown improvising a song about passing the ball and passing the ball with weird moves. Looking at them, the guy who said he can’t believe it clarifies what he was talking about: “No, I can’t believe how easy it was to save hundreds of dollars on my car insurance with GEICO”.

“Believe it. GEICO could save you 15% or more on car insurance,” the voiceover says at the end of the commercial, which also features Troy Hall and Courtney Burnell as the two basketball players talking to each other and Chase Malloy and Nashid Beard as their teammates.