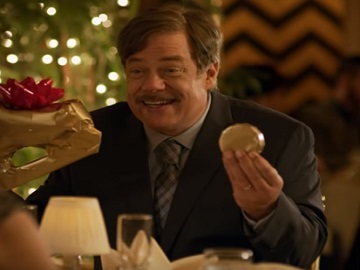 GEICO has released a hilarious new commercial, featuring a husband who, while out to a fancy dinner, gifts his wife hockey gear for their anniversary.

The 30-second ad opens with the married couple in a restaurant, with the lady appreciating the place and the atmosphere. Wishing her “Happy Anniversary,” he takes out his gift for her: a hockey stick wrapped in gift paper and completed with a ribbon. “Is that what I think it is?” she asks with a smile on her face. “I don’t know, it’s a hockey stick,” her husband answers, adding that there’s more. He then shows her a puck and skates, wrapped as well in golden gift paper. “Oh, Ned! You nailed it!,” she says in a not very convincing way.

“Hockey’s here! The savings never left. GEICO, proud partner of the NHL,” the voiceover says at the end of the commercial, which features Michelle Jones and John Ennis as the married couple.

In 2016, GEICO renewed its NHL sponsorship in US by signing a three-year extension with ice-hockey league. Thus, the insurance company, as the official automobile insurance partner of the elite ice hockey league, will support showpiece events like the Winter Classic and All-Star Game and will also be a presenting partner of games broadcast on the NHL Network, and of Stanley Cup play-off games shown on NBC, NBCSN, NHL Network, USA and CNBC.

Previous: AT&T Just OK Is Not OK Surgeon Commercial
Next: WordPress Commercial: Build a Website That Can