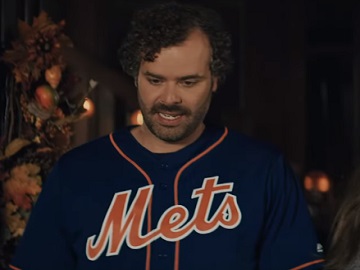 GEICO continues its “Rivalries” campaign with a new installment, highlighting that, while rivalries are though, saving money with GEICO is easy.

The spot features a group of kids trick-or-treating a couple. When the door opens, it turns out the man is a Mets fan. Noticing that one of the kids is dressed up as a New York Yankee baseball player, he asks him if he doesn’t want to be a New York Met. Confronted with a refusal, the man gets offended. While he turns around to grab some candies for the little ones, his wife tells the boy that, secretly, she loves the Yankees, which leaves him speechless.

“Rivalries are though. Saving money with GEICO is easy,” the voiceover says at the end of the commercial, adding that GEICO is a proud partner of Major League Baseball.