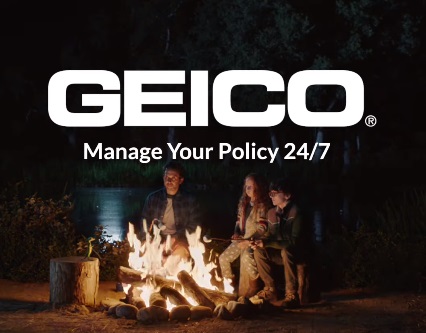 The Gecko makes S’mores for the first time and accidentally lights his marshmallow on fire in the latest GEICO ad, that focuses on the company’s mobile app and the possibility for customers to manage their policy 24/7.

The 30-second spot features the company’s famous mascot chatting with a family near a fire camp, while holding his marshmallow above the flames. He tells the father and his two kids that if they haven’t thought about switching to GEICO, they’re missing out. The girl tries to draw the Gecko’s attention to what’s happening, but the latter is too busy to notice because he’s explaining how “the mobile app makes it easy to manage your policy, even way out here” (referring to the woods). The father also tries to tell the gecko that his marshmallow is on fire, but with no success. The small lizard keeps talking, mentioning that with GEICO’s mobile app you can also manage digital ID cards, get emergency roadside service and even file a claim. However, he doesn’t get to say this last word because he finally notices the burning marshmallow, a piece of which ends up on the man’s cheek. “Oops, that cheeky little thing got away from me,” the Gecko says, adding “My bad”.

The commercial, which features Brad Morris as the father, Eily Bowser as the daughter and Elliot Smith as the son, ends with the voiceover saying the tagline “GEICO. It’s easy to manage your policy whenever, wherever”.