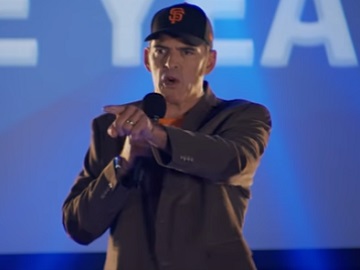 The 30-second ad, titled “Employee of the Year” and released with the #Rivalries hashtag, features a CEO and San Francisco Giant fan who’s about to name the winner of the Employee of the Year award, on stage, during a company event. He says the winner is Michael Paley, but when he sees the man is wearing an Oakland A jersey, he suddenly decides to revoke the award and give it to the guy sitting next to Paley. The respective guy says it’s his first day in the company, but this is not an issue, though. The CEO then asks the audience to give a round of applause.

“Rivalries are tough. Saving money with GEICO is easy,” the voiceover says at the end of the spot, adding “GEICO – Proud Partner of MLB”.

The commercial cast includes Jay Johnston as the CEO, Brendan Farrell as Michael Paley, and Grayson Niles as the new employee.