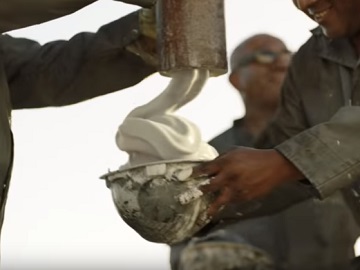 GEICO has released a new commercial, featuring a drilling crew that strikes the mother lode of soft serve ice cream.

The spot features two workers looking at their coworkers as they rush to eat ice cream. “I can’t believe it,” says one of them. “That we just hit the mother lode of soft-serve ice cream?” the other asks, while in the meantime another worker shows up pushing a handbarrow filled with ice cream cones. “No, I can’t believe how easy it was to save hundreds of dollars on my car insurance with GEICO,” his fellow replies, showing him his smartphone with a Congratulations message. At this point, they are interrupted by another co-worker who shouts excitedly that the crew struck sprinkles.

The ad, which features Patrick Hume, Tony Becker and Ed Dyer as workers, Dave Darmsteder as the cone worker, and Roman Arabia as the helmet worker, concludes with the voiceover (Andrew Anthony) saying “Believe it. GEICO could save you 15% or more on car insurance”.