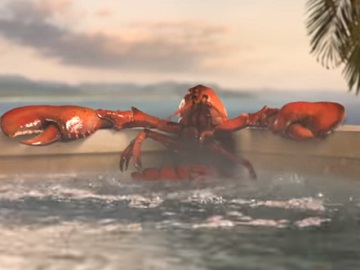 A newlywed couple on their honeymoon is surprised to find a talking lobster hanging out with them in their hot tub in the latest GEICO ad, that promotes the company’s car insurance policy.

The 30-second spot opens with the man (played by Tristan Winger) telling his wife (played by Tyra Colar), who’s right next to him in a hot tub, “I can’t believe it”. “That there’s a lobster in our hot tub?” she asks him, but he doesn’t get to answer as the crustacean starts talking to them, saying he needed that hot bath. At this point, the guy grabs his smartphone and, showing it to his lady, specifies that he was actually referring to how easy it was to save hundreds of dollars on their car insurance with GEICO. “We could have been doing this a long time ago,” he adds. The lobster (voiced by H Michael Croner), willing to make conversation, asks the young couple if they’re staying at the respective hotel and, learning that they just got married, he congratulates them. He also takes the opportunity to specify that he’s afraid of commitment. Spotting a chef who’s obviously looking for something in the area, the lobster adds that he’s also afraid of being boiled alive and dives under water.

“Believe it. GEICO could save you 15% or more on car insurance,” the voiceover says at the end of the commercial.