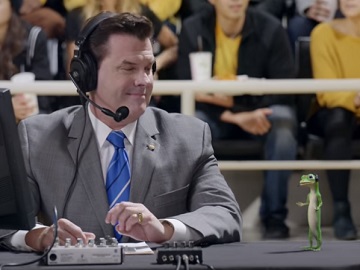 GEICO celebrates its status as proud partner of NCAA March Madness in a new commercial, featuring the company’s longtime mascot, the Gecko.

The latter attends his first NCAA March Madness tournament and gets so excited after cheering during the first game he watches from the sportscaster’s desk, he pulls a hammy. “So, how are you enjoying your first NCAA tournament?” the sportscaster asks the Gecko at the beginning of the 30-second ad. “It’s just lovely,” the green little mascot replies, saying he’s there to let all folks know how easy it is to save money on their car insurance with GEICO”.

He then interrupts the phrase to cheer on a player. “Kick it outside!,” “Shoot the three!” he “instructs” the player on the court, shouting “Yesss” from the top of his lungs when the outcome is the one he had wished for. His excitement brought along an injury though” he pulled a hammy and asks for a cube of ice.