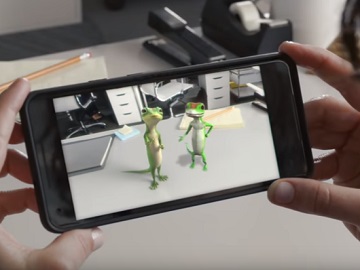 The Gecko joins Augmented Reality in the latest GEICO ad, that celebrates the company’s 75-year history of savings and service.

The 30-second spot features a woman and two of her co-workers at the office, watching the AR Gecko created by Travis in IT. “GEICO has over 75 years of savings and service,” the mascot says, wowing the woman holding the phone and her colleagues. “It’s amazing,” a woman exclaims. At this point, the real Gecko shows up on the desk, asking if that’s Travis’s app. The woman holding the phone notices there’s two of them and the other one concludes that they’re multiplying. The Gecko tries to point out that he’s real, but no one believes him.

The commercial, which features Stephanie Merlo as the woman with the phone, Erin Whitehead and Aalok Mehta as her coworkers, ends with the voiceover (Andrew Anthony) saying the tagline “GEICO – Over 75 years of savings and service”.