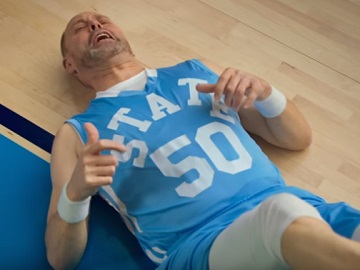 GEICO celebrates its status as proud partner of the March Madness in a new commercial, featuring two announcers who can’t believe it when they see Ernie Johnson playing in this years NCAA March Madness basketball tournament.

The 30-second spot opens with one of the two announcers saying he can’t believe it. “What? That Ernie Johnson decided to play in this year’s tournament?” his colleague asks watching Johnson going on court. “No, I can’t believe how easy it was for me to save hundreds of dollars on my car insurance with GEICO,” answers the first announcer, showing his smartphone.

Right after being praised by the older announcer for his “solid numbers” in the past, Johnson falls to the ground because of a foot cramp and asks a teammate to stretch it out.

“Believe it. GEICO can save you 15% or more on car insurance,” the voiceover says at the end of the commercial.
Johnson, a sportscaster for Turner Sports and CBS Sports who contributes to the joint coverage of the NCAA Division I Men’s Basketball Tournament for Turner and CBS, took on social media his latest gig for the insurance company.

“Y’all are lucky I decided not to play in the #NCAA this year. Your #MarchMadness brackets weren’t ready for what I was about to bring. @GEICO almost got a sneak peak,” he wrote on Twitter, leaving a link to the commercial.

The sportscaster also stars as a grooming ref in a series of new ads for the official men’s personal cleaning and grooming products of the NCAA, which include Degree Motion Sense Antiperspirant, Suave 3-in-1 Head-to-Toe Cleanser, and more.