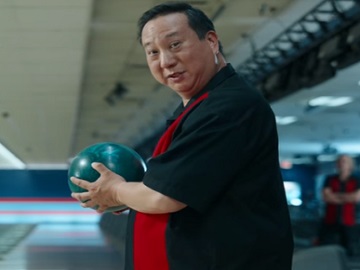 The latest GEICO ad features a man who, from bowling to salsa dancing, knows how to strike a pose.

The spot opens with the protagonist, played by Christopher Chen, in a bowling room, saying that choosing his car insurance was the easiest decision ever. “I switched to GEICO and saved hundreds,” he says, rolling the bowling ball down the lane and knocking down all the possible pins, positioned at the far end of all the lanes. “That’s a win,” he adds, taking by the hand a salsa dancer (played by Yesenia Adame) and leading her to the dancing floor. The bowler turned dancer also reveals that this is not the only reason he switched to GEICO. “GEICO is a company I can trust, with over 75 years of great savings and service,” he mentions while showing off his dancing skills and striking a pose, which leads to him and his partner win the trophy. “Now that’s a win-win,” he says at the end of the commercial.

Eventually, the voiceover urges viewers to switch to GEICO, adding the tagline “It’s a win-win”.

Chen got his first major role in 2000, when he was cast as Tad Takashi in the dramatic short film The Shangri-la Café, and has appeared, since then, in multiple TV shows including Adam Ruins Everything, Modern Family, Scream Queens, Pure Genius, Castle, All About Manos, Chuck, New Girl, and Criminal Minds. Chen is the latest name to join a growing roster of actors starring in ads for the insurance company. Casey Campbell also stars as a baseball fan who misses the opportunity to catch a foul ball, Jack Plotnick and Daniele O’Loughlin play a couple who turn their living room into a rain forest to reduce the stress of moving, David Anthony Hinton plays a nervous renter who covers his apartment in packing bubbles to keep everything protected, Daniel Roebuck plays Alexander Graham Bell as he rudely answers his phone in the middle of a show, Darren Richardson portrays the first heckler in recorded history, British actor Max Lloyd-Jones plays a knight teased by Richardson’s character. David Ebert made appearances in several ads, as well as Steve Talley, who played a space captain who lost the keys to his ship just when the galaxy needed him most.