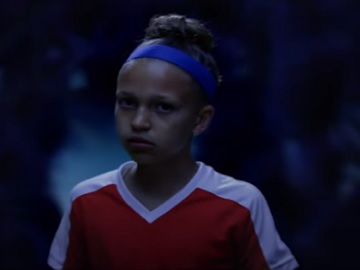 American retired professional soccer player Mia Hamm and American soccer player Mallory Pug, who currently plays for the Washington Spirit of the National Women’s Soccer League and the United States women’s national soccer team, teamed up with Gatorade and Dr. Seuss to inspire the next generation of female athletes to keep playing.

Hamm, who is a two-time Olympic gold medalist and two-time FIFA Women’s World Cup champion, and Pug co-star in a 2 minute and a half film created by agency TBWA Chiat Day and titled “Every Day Is Your Day,” in which they recite the iconic Dr Seuss poem “Oh, the Place You’ll Go” to demonstrate the powerful impact that sports can have on young athletes’ lives. The beginning of the video sees Hamm standing with a young soccer player at the entrance of a packed stadium, leaning over and telling her “Congratulations. Today is your day. You’re off to great places. You’re off and away”.

The latter is then shown in a world of tufted trees and green grass, where she dribbles a colorful ball through the landscape, showing off deft skill. Eventually, she reaches a mountain top, where she must choose which way to go. Joined by her teammates and arriving on a stadium, the girl scores a goal against an opponent. She is then seen talking to another young player, a passing to the next generation.

The commercial, which concludes with the tagline “Every generation fuels the next” flashing across the screen, is part of Gatorade’s Sisters in Sweat campaign. This is not the only installment Pugh stars in. She is also featured in the brand’s Bring the Heat campaign this summer, which also features a quick shot of Lionel Messi.