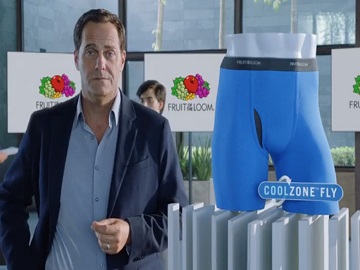 Fruit of the Loom advertises its CoolZone Fly Boxer Briefs in a new commercial from creative agency Crispin Porter & Bogusky, that shows what life without vents would look like.

The spot, available as 90-, 30- and 15-second edits, opens with a brand spokesman stating that Fruit of the Loom’s COOLZONE Fly Boxer Briefs have vents, which have understated importance. He then shows how important vents are by showing a range of people in different places, where the air vents are closed. Thus, viewers get to see how passengers on a bus, a man in a taxi and employees in an office start panicking and fight for air, as the heat pushes them to do whatever it takes to get out of there: smash windows with chairs and many more.

“Fruit of the Loom CoolZone Fly Boxer Briefs. Without vents it’s hard to keep your cool,” the spokesman concludes at the end of the commercial.

Fruit of the Loom Men’s Coolzone Boxer Briefs are tag-free boxer briefs with no-ride-up legs, featuring cool zone mesh fly, which provides ventilation where you need it, as well as Dual Defense technology, which helps wick moisture and defend against odor.