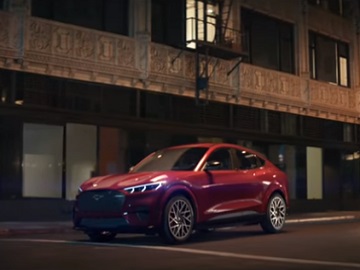 The Hollywood actor stars in a 15-second commercial, titled “New Breed,” that presents the newest member of the brand’s family. “Should have seen it coming. A stampede unleashed 55 years ago,” Elba says as the original Mustang and its later models are speeding down the road. “Just when you think you know where they’re going, they do something unexpected. Something that moves us all forward and holds nothing back,” he adds while approaching the Mach-E on the street.

The commercial, which marks the first work of BBDO for Ford since being named its global creative agency partner, is set to run through the end of the year. The Mach-E will be available late 2020.

Elba, who worked at a Ford factory in England, in the 1980s, is not the only one enlisted to star in Ford’s new campaign for the Mach-E. Influencers David Patterson, That1320Chick and Katie Osborne have also teamed up with the automotive brand to encourage Instagram users to solve a puzzle that is discoverable by using the hashtag #ElectricAndUntamed. When all 10 photos are put together, the silhouette of the Mach-E can be seen.