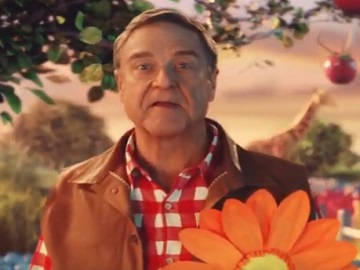 Fisher-Price has launched a new marketing campaign, aimed at connecting the brand with new parents and gift-givers and encouraging them to be kids again.

The campaign, which marks the brand’s first televised campaign and carries the tagline “Let’s Be Kids,” includes a series of seven TV spots led by an extended clip featuring John Goodman. The actor plays the classic farmer from the Fisher-Price Little People collection and leads the audience through the world of Little People, where dozens of toys make kids happy. “You lived here once. It was the happiest you’d ever been. You were once so happy you passed out on a lion. Because there’s rhyme and reason around here. It was rhyme time all the time. And you were feeling fine. Then, you moved on. You had to. To that tall place, where opinions are loud and clocks are the boss.

And you have to wear shoes all the time. But you can always come back. This time, with someone smaller. Someone who will teach you things you didn’t know you forgot. Because here we can all be kids. And if you don’t remember how, don’t worry, you’ll find your way again. Because everything’s exactly how you left it,” Goodman says on the 60-second ad, which was created by Wieden & Kennedy Portland and debuted during Sunday’s Emmy-Awards broadcast, on Fox.

The Mattel-owned toy brand has also partnered with Walmart for a series of Fisher-Price Let’s Be Kids Pop-Up Playdate events taking place at select stores in September and October. Families will thus have the opportunity to engage in a variety of fun activities, such as riding a giant puppy, dancing with a sloth, and be Batman through virtual reality.