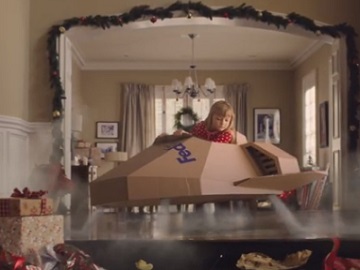 FedEx has released its Christmas commercial, highlighting that the company delivers more than just packages or pallets – they also deliver imagination.

The spot, created by BBDO New York and titled “Gift box,” features a young girl who, while playing with a plane made of paper, she comes up with the idea of using the two FedEx cardboard boxes left in the hallway to build a plane. She then takes off and flies away, across the entire house, with the family’s dog behind her. The end of the video sees the girl back in the hallway, in one of the boxes.

“Imagination, what we deliver,” the voiceover says.

This is only one in a series of instalments aimed at highlighting that the Memphis-based logistics giant delivers more than simple objects. “To us, it’s not just about packages and pallets, it’s about what we do for people and communities,” the company states on its website, showing how they deliver hope by giving a helping hand after natural disasters, how they deliver compassion by providing eye care to rural communities, how they deliver community by ensuring a soccer field to a neighborhood in Poland, how they deliver conservation by transporting endangered pandas from China to the Calgary Zoo, in Canada, and more.

In another commercial, titled “Tortoise & The Hare,” the multinational courier delivery services company also shows how it delivers comfort to a little girl who loses one of her favorite stuffed toys. The idea of delivering more than packages is also illustrated through a series of 15-second comedic spots, featuring Steelers fans that find a unique way to celebrate Jerome Bettis and Bears fans that get creative with makeup.