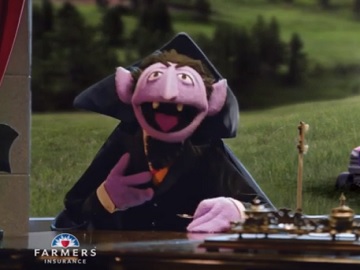 One of the spots, entitled “One,” opens with Prof. Burke – played by Academy Award-winning actor J.K Simmons – telling Bert “At Farmers Insurance, we’ve seen almost everything, so we know how to cover almost anything.” “Even an accident brought to you by the number 1,” Bert says. At this point, Count Von Count shows up, declaring that he’s looking for his monocle so he could mold along. While he’s looking for the monocle, a lightning strikes his lawn mower left outside, near the open window. “Well, that’s one chore I can cross off my list,” he adds.

“At Farmers, we know a thing or two because we’ve seen a thing or two,” Burke says at the end of the commercial.
Additional spots feature Grover and Ernie.