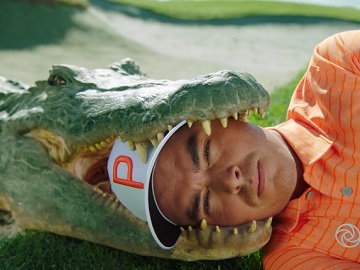 Rickie Fowler shows how he prepares for crushingly high-pressure situations in a new Farmers Insurance commercial.

“To survive the tour, you’ve got to be able to thrive under pressure,” the pro golf player says at the beginning of the 15-second spot, part of “Rickie’s Guide to Getting Tournament-Ready” series. As the ad goes on, it turns out he has his head into an alligator’s mouth. “I could do this all day,” he adds, his arms crossed around his chest.

“When you prepare for everything, you know how to handle almost anything” onscreen lines read at the end of the commercial.

In previous spots, released in the past years, he traveled back in time to compete against his younger self, give himself some putting pointers, and potentially disrupt the entire space-time continuum. He also showed young Rickie how, with proper technique, hips can generate powerful drives and also that they can generate powerful dance moves.